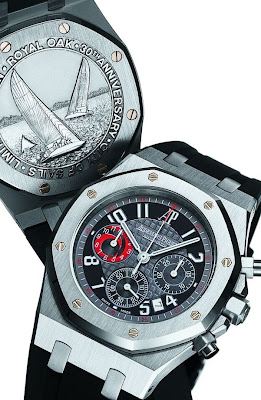 Good riddance! I for once, am very happy Audemars Piguet is no longer sponsoring this event (America's Cup). As they say; "It was fun at the beginning..." but exuberant costs and a notable hike in prices just made this sponsorship inviable. The "Alinghi" theme by AP was indeed beginning to smell rancid. Only the first "City of Sails" was really a Blockbuster, the carbon "Team Alinghi" piece did only barely alright while the "Polaris" and "Alinghi" really struggled to be sold.

Personally I am ecstatic that AP have decided to keep their money and hope (pretty-please...) that there are NO more sponsorships in the future of any mainstream/popular events. As I mentioned before, the Alinghi theme was starting to smell more and more like a fish market rather than an exclusive Yacht-Club. I see no reason why AP would need to sponsor events and spend money in publicity stunts instead of using it for investigation. AP have reached all the recognition possible amongst watch lovers/collectors/aficionados and have no capacity to increase production to become a more "commercial" brand in a short time frame. It should be obvious by now that AP have no need to join forces with anybody to sell their watches. The Barrichello II was a hit NOT because of Rubens' driving skills but rather because the watch is a great piece of kit. Let's face it, AP sells regardless and despite Rubens, Arnold, Jay-Z, Sachin, Alinghi, Maserati or any other matter. The market is, amongst the initiated, very well penetrated and since they are not in the position to manufacture and supply to the rest of the world, such expenditures are frivolous at best, especially in the current economic times. AP should shine through its own merits of excellence and not bet on the success of third parties. 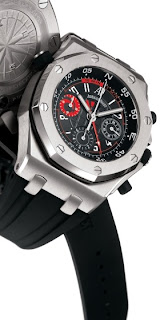 Now, there is a negative side to this change of sponsorship. The obvious degrading of the Alinghi series. As mentioned before, some where not hot sellers and I suspect that the arrival of an Alinghi Hublot (soon I bet...) their value will be going down a couple of notches. Since the official announcement, I have received three mails of fellow collectors wanting to sell their Alinghis. Some even the first and most desirable out of the collection. It is ironic that companies that are so brand conscious as watch manufacturers would invest such amounts of money in other companies or ventures where they have no control over decisions. If they only had a bit of sense they would add a clause that would not allow the sponsored party to be sponsored by any competitor for a period of five (or even ten) years, should the sponsoring agreement in the future not be renewed. You might think that this is extreme but when you initially put 8 million Swiss francs (for hot air) and a commitment/relationship of almost a decade on the table to have your name on a small portion of the sail, I do think you are entitled to cover your butt.

Signing with Hublot seems to be almost a vengeance from Alinghi's leadership for AP not agreeing with the new fees for the next America's Cup. By the way, it appears that AP is not alone and other sponsors have already decided to leave the team. Apart from the cost, there was also a certain "unease" about the arrogance of Alinghi's management. I guess that in a world of ungrateful pricks such things are expected. By no means do I know the whole story, nor do I pretend to. Yet here are the facts: AP sponsored the first boat, the "Be HAPpy", a boat to take part in a competition that no European country had won in a century from the only european country with no access to the sea. It was disqualified for several technical reasons (also known as cheating). After this success they come back with the Alinghi and AP supports them yet again. They win and everything is a big success. So big in fact that suddenly there was hardly a boat without a watch manufacturer somewhere on the sails... Now, all of this seems to be forgotten and despite the economic crisis in the luxury sector there is a considerable hike in price to sponsor Alinghi for the 33rd America's Cup. There is no agreement and the result is that Hublot, known to cannibalize the OffShore not only in looks but in strategy, signs the deal. Well, if you had any doubts that Bertarelli is an asshole, now you know for sure.

The moral of the story; You just can't work with assholes... No mater how big and successful they are, eventually you will get shitted upon. 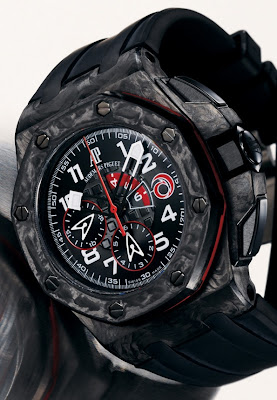 What happens now? Well I hope that dropping the sponsorship of sail related events does not mean that the "marine" inspired line will be discontinued by AP. A proper and new Carbon Sail watch could still be attractive to many. Hell, let's go nuts and make it a regular production model!

Official announcement...
P.s. I can't wait for the first guy to enter an AP Boutique and ask; "Excuse me, do you have one of those Alinghi Hublot for sale?..." Would love to see the sales staff response after the 12th time...

*Latin for; "Who sleeps with children awakes soiled..." In other words; choose your partners wisely.
Posted by KronosClub ... Wednesday, September 02, 2009 7 comments: