As it is by now tradition, Jaeger at the SIHH, presents very interesting novelties in all their price ranges. Pretty much like in previous editions of the fair there was something for everybody this years too. Oddly, the presentation that did not shine as much (rather disappointed) was the somewhat "meager" offering at the Reverso Anniversary lineup. Don't get me wrong, the Tribute piece is a extraordinarily elegant an well balanced piece while the repeater is simply stunning... But what happened in between these two price points? I do not know about you, but I am missing quite a couple of complications in larger and thinner Reverso cases. (At first I thought they where where keeping them for last!) Regardless, let's get on with it. 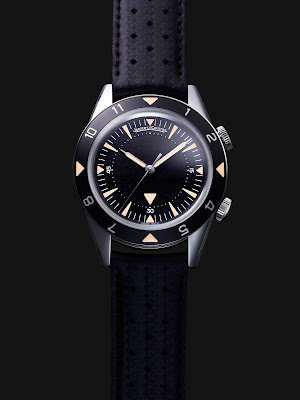 A long awaited and eagerly anticipated by vintage aficionados was undoubtedly the "Deep Sea". As with the "Tribute to Polaris", the Deep Sea takes the replica motif to the extreme. Actually, you could say that they might have gone too far. As a collectors item it is surely meant to join the cabinet next to the Polaris. As a watch, I must say that considering the materials used, techniques and features I can only state that the price is well beyond what it should be. No date, a fixed painted bezel, polycarbonate glass, a somewhat skimpy 40mm (but true to the original) case construction and a purposely "muffled" sound to remain true to the replica. All that at a price of a whopping 9,500€. The truth is that the times have caught up with Jaeger on this one. They have not gone completely nuts since the price is somewhat coherent with the other Memovox lineup. What happened is that back when the Deep Sea was produced (not forgetting that since then Jaeger has evolved as a brand) the comparative price point at that time is closer to the equivalent of 3,000€ today, and not 9,000€. Hence there is a disparity in quality received for the money. Yet, for a collector the opportunity to have a brand new Deep Sea might/could be well worth the extra 6k. Both are limited; 959 for the world edition and 359 for the U.S./Boutique edition. 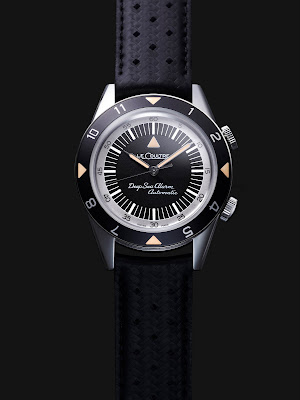 There will be two versions, the regular Limited Edition (up on top) and a U.S. version (down here) than can be purchased exclusively in the U.S. or boutiques around the world. Originally the Deep Sea was released in the US under the "leCoultre" brand since because of legal issues they could not use their full name and "Jaeger" had to be left out. Personally I choose the U.S. version. It just looks more "vintage" despite being busier on the dial. Even if the high price could be a deterrent (as well as being a bit small for a sports activity watch with 40mm) this one could be the a piece to consider.

As described before the "Tribute to Reverso" is quite a piece. Perfect size, impeccable proportions, elegant, well balanced, comfortable and above all iconic. 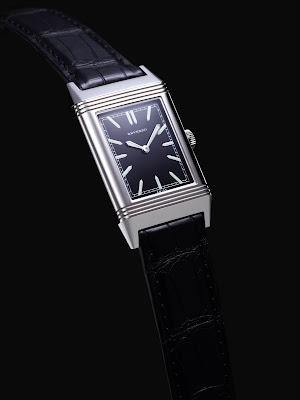 This Tribute will fit medium to large size wrists. The price is going to be just north of 5,000€ a bit steep but probably pre-adjusted for the several upcoming price hikes due to the Swiss Frank going through the roof and ever rising gold prices. That is a problem that those in EU countries will feel in their wallets in no time soon. Anyway, not much more can be said since seeing it in the flesh is well worth a little detour. As with most Reversos there are two versions, steel and rose gold. Rose gold limited to 500 units and mesmerizing enamel version limited to 100 pieces.

The crown jewel of this year is the Reverso repeater "a Rideao". What a stunner! Apart from doing away with that ugly classic repeater trigger this Reverso is actually smaller than the Gyro 2 or the Triptyque. Unfortunately, this Reverso was only to been seen as a prototype and god knows I am not for judging according to prototypes. What I can say is that the system to arm the repetition is quite more pleasant and less "fiddly" than the classic trigger. Finishes, as with all high-end pieces by Jaeger, will be beyond reproach. I will not give more details until I have a production model in my hands. Although I must admit that from a distance the piece looks very promising. 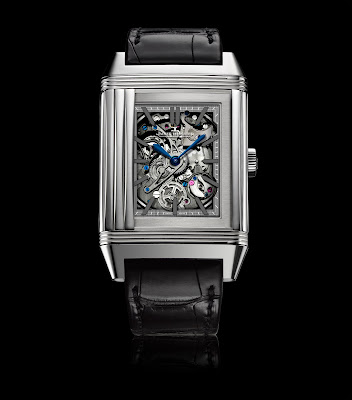 Apart from the stars the Ultra Thin Moon is also a piece to be taken into consideration, like the new Compressor ceramic chrono and the new version of the Navy Seals chrono. Unfortunately these pieces will be presented at a later stage and official pictures will not be released until then. I guess that leaving a little for later will keep the specialized press occupied. I see a strategy to present stuff in the end of March perhaps to steal some of the Basel World's show. The last five years at Jaeger have been at such a competitive push that once the pace has been normalized the presentation seemed a bit gray. However, it is simply impossible to sustain such a level of developments for that many years. Sooner or later that could be the very reason of your downfall. Consolidating and reducing the number of models should be a primary concern in these days especially for manufactures with over 1100 different references in their catalogue.
Posted by KronosClub ... Monday, January 31, 2011 2 comments:

This is the first departure from the 103 series. The long awaited bridge between the 103 and the 202 not only in price but in concepts as well. A bit awkward and aggressive at first but surprisingly comfortable and well balanced once you get closer to it. The new display orientation makes a whole of sense with a shirt on. Pretty much like MB & F "HM2" or F.P. Journe's philosophy where the time is displayed on the far right of the dial, the piece that usually happens to stick out. A surprisingly confortable and convenient wear. 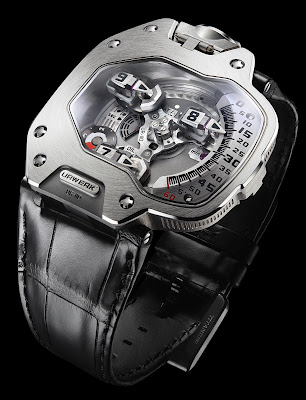 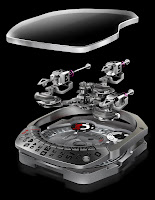 The depth and three dimensional aspect of the dial is accentuated by the silver finish of this piece. Unlike the black URWERKs the details of the finishes are much more present here. The bottom of the display has the 5 year service meter, a day night indicator and what is (except for the CC1) the fists time a regular production URWERK has a seconds hand. The rear has the two turbines that dampen an excessive speed of the rotor but with no possibility to adjust the speed of rotation. The function of these two turbines is more that one of protecting the movement from damage rather than controlling the winding as it does on the UR-202. The construction of the case is no picnic either. The finishes and details go beyond most watch cases to date. The angles and crevasses are machined to perfection, almost too clinical. The crown with a built in lever is exceptionally easy to operate. As with all URWERKs it is real treat to set the time since the smoothness of the crown is one of Felix's secret emphasis. To tell you the truth I suspect that this is a detail that most watch lovers secretly enjoy. 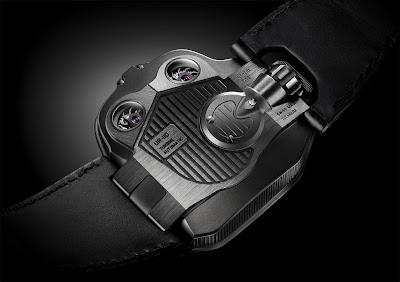 The way the time is displayed is a hybrid method between the classic satellite of the 103 and the flipping dice of the 200 series. Since a picture is worth a thousand words, I take it that a movie is worth a thousand pictures... so in that spirit I have uploaded this little video for you. Enjoy!

As much as I have mixed feelings, I am certain that in no time this could very well be one of, if not the most popular URWERK to date. I must admit that after wearing the 110 and putting my beloved 103.05 back on felt... a bit "blend". Once most 103 fans get used to the more aggressive, more important, modern lines of the UR-110 it will be a reference for future models. Expect a black version soon and variants. Black will make it more mysterious but you will loose the depth of the the silver finish. Since there will be only 55 of these made I suggest haste when going to your dealer. The price is not fixed yet but it will be positioned at around 85,000$ which is between the 103 and 202. Considering the case, movement, complexity, functions (especially the very appreciated 5-year service indicator) I would consider this one very closely. I put this one amongst the best 3 of this year's Geneva fair.

This year has been relatively short at the SIHH for me. Hectic and with a cold it was not easy yet the whole visit could be described as; "short but sweet". The general feel was a bit "grayish" in general with much less ostentatious pieces as well as trumpets announcing "the" watch of the century... Things have been much more down to earth than previous years much to the disappointment of news-hungry watch enthusiasts. To be honest, I think it is for the better. Most presented pretty much that which was expected; A larger Offshore from AP (plus a horrendous oversized contraption), another replica by Jaeger, another Zeitwerk by Lange, a couple of potential collectors pieces by Panerai and a very surprising "dee-blinging" by Roger Dubuis. The later was probably the most interesting development.

After the monotony of the SIHH you could say that the GTE was "almost" more interesting than the SIHH this year. Where it not for a few stunningly tasteless contraptions, one could even say that the GTE was a better show. Ressence and Speake-Marin where undoubtedly some of the few worth stopping and taking a look at and there was one that I thought completely through me off... HD3's "Slide" was certainly an unconventional solution amongst what is considered "Haute Horologerie". But guess what? I actually liked it! As a tecy and gadget lover that is...

Anyway, during these next days I will be bloging the most interesting pieces one by one. Stay tuned.
Posted by KronosClub ... Sunday, January 23, 2011 1 comment: