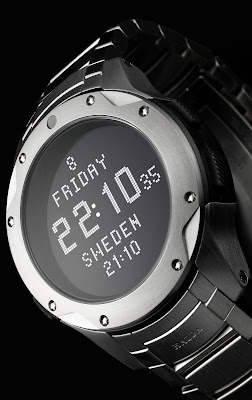 It is rare that I speak of quartz, let alone digital, watches here at all. Now, there are always exceptions and in order for them to be exceptions they would have to be well worth it. Like many of us in my age bracket (40's...) we do remember that our first love of watches where most likely a digital Casio or Seiko. A long time has passed since them and we have all changed quite a bit in our preferences. To the point of not only avoiding digital but rather shunning it altogether. The question is simple; is it our evolution into more refined/exclusive products or the simple lack of evolution of the digital in the luxury watch segment? I guess a bit of both. Myself, the only digital I wear sometimes, and quite enjoy from time to time, is Linde Werdelin's land instrument. However, it is an instrument and meant as addition to a watch. Surprisingly, being an addict to all thinks that have lights and go beep I have gone the mechanical way when it comes to watches.

It is only yesterday that by chance I came across a new project called HALDA . I must admit I was quite impressed. The HALDA looked like it could be the first Luxury Digital watch to date. A very gutsy move since it is difficult to make anybody, especially watch enthusiasts, spend that amount of money on electronics. VERTU has somewhat overcome that prejudice but still, it will be a difficult task considering the times. The idea is to use the strap as a docking mechanism that will accept not only the two current modules but subsequent modules with different functions and complications in the future. This modular concept might be interesting yet on the long run could limit the possibilities of HALDA to evolve inside this form. 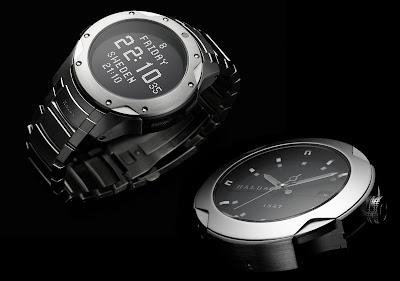 I have not been able to see the HALDA in the flesh so my critique is only based on the product itself and the marketing strategy. Construction-vise I have owned a Sjöö Sandström CHRONOLINK since probably the creation of the company (I am not sure but it was back in 1997 when I got mine) And judging from the make and quality of this watch there should be no problems at all with this one either. The main figure behind this is Mikael Sandström. By the way, thanks for not calling this watch something as unpronounceable as ShjjooossSaaandeströööemm. What a nightmare! 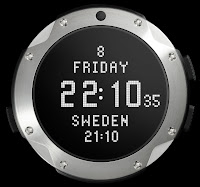 The watch looks quite impressive from the renders. The functions are tuned to space missions and remind me of the functionality of Omega's now retired X-33. There is all sorts of features related to mission objectives like mission timers, countdowns, double timezone, alarms and a G-Force counter that will store the different accelerations in a memory bank. Not that many of us will be going into space anytime soon but I would love to sit in a roller coaster and test this. Another option would be as a copilot inside a Formula 1 car. (Although being Swedish I suspect that some will be tempted to test it during the running of the bulls in Pamplona. Swedes have a habit of getting caught by the bulls... alcohol, no sleep and a pissed-off bull result generally in a large amount of pain.) One of the most aesthetically appealing feature is the self adjusting backlight with an exterior sensor (if this sensor is coupled with the actual watch computer it could lead to some very interesting features). The sensor is located at 12 o'clock and will automatically adjust the intensity and even the color wavelength of the display. Very cool! My last surprise is that contrary to the X-33 or the Speedmaster the HALDA goes 100 meters deep. Which according to my scale it is well inside the casual swim or "poolproof" parameter. Which comes quite handy since it is much more likely to end up in a pool than in space. 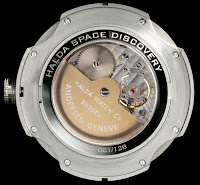 The mechanical movement seems to be a bit left out compared to the impact of the space module. This module is no joke, a very desirable NOS Andersen tuned to operate at 36,000 bph. The design is clean and straight to the point although on the back the rotor is maybe too classic for this concept. I would also note that the mechanical module is only 50 meter waterproof. This creates a disparity between both modules and could lead to confusion by the owner. For some reason the mechanical module is 2 millimeters thiner than the space module. I am not certain if it would help, but making it the same thickness as the space module to make it waterproof to 100 meters. This would standardize not only the size but also the performance. 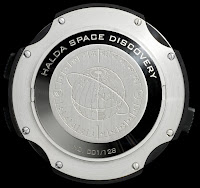 On the negative side; The proportions seem to be quite well balanced although the case "sounds" a bit thick at slightly over 17 millimeters for the space module. However, this could change when seen in the flesh. There are some features or indications that I am missing. Adding things such as an equation of time, sunrise and sunset or even a moonphase would greatly appreciated. The (now lost) nerdy hour chime would also make sense in a watch of these characteristics since it does help keep track of time. I was not too happy initially with the two years battery life yet in the end it is for the best since it forces the watch to go through service regularly for firmware updates and gasket changes to ensure the waterproof property of the watch. I am not particularly fond of the bracelet, especially the part of the clasp. Again, I generally dislike all bracelets except for the Submariner's and RoyalOak. From this view of the watch, the clasp does not look very "luxury" to me. Many times it happens that watch designers put so much emphasis on the design of the watch that details like the clasp are often left to chance. I hope there is a kevlar/velcro option that can be worn on the wrists without the space suit. 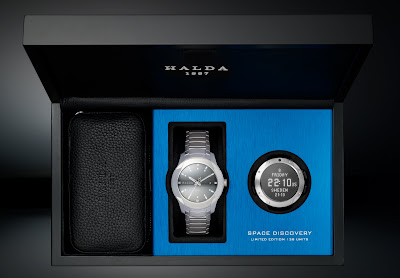 These first 128 pieces will be sold directly for the time being. The idea is to slowly setup a network of trusted distributors worldwide. The price is set to 8,800€ for the set with the two modules, the two straps, travel box and the instructions. Delivery is around 3 to 4 months from the initial order. I have not yet had the chance to get my hands on the HALDA for a definite critique but from what I see I must say I like the whole idea very much.

Awesome! Pictures at last of this little gem! Believe it or not, the watch weights without the strap just little over 13 grams. I held it in my hands during the Geneva show 2010 and it is just mind blowing. There is an unconfirmed rumor that say that Nadal actually has tested this watch during matches under one of his wristbands. Just like Massa wore his Turbillon during racing. 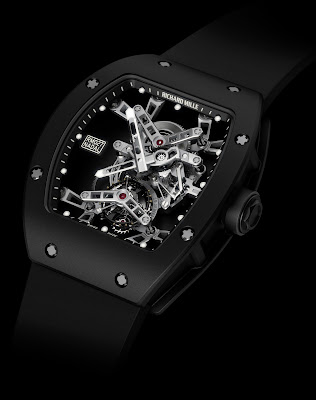 Great move to sign Nadal. Like Felipe he is a very nice and down to earth professional a real joy to have and work with. I rarely like it when brands put famous people under their banners but these two guys are a very good choice.