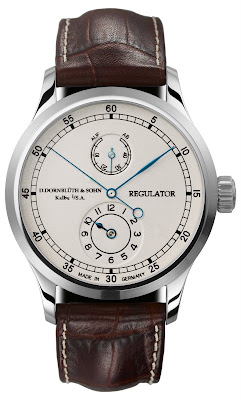 There is a wave of new-old classic watchmakers gaining in respect and acceptance amongst collectors. In the much appreciated classic style of the already highly revered Philippe Dufour or Kari Voutilainen, these "new-old" comers are much cheaper but still just as exclusive. Dornblüth, Mosser, Lang & Heyne, Montres Normandes, etc... are a few in this new classic wave, more concerned about doing the stuff that has been working fine until now, only better. The goal is not to waste any time trying to reinvent new ways to do what has been done for the better part of two centuries (and very successfully if you ask me). Using modern tools to reach unknown quality standards at unseen prices is just another way to interpret what modern watch making should be. The new school revolution is undoubtedly led by Richard Mille. His major contribution was to push the limits by including materials and advances that nobody has until recently dared to include in their watches. 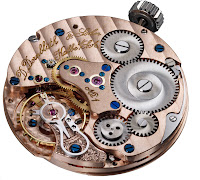 Who is right? Why not both? I guess this reminds me of the childish feud between those that swear their allegiance to the "Nouvelle Cuisine" or the classic no frills cooking. The T-bone steak versus the Fillet Mignon... personally, I like both. To me, this is a non-issue. I have no problem owning a Philippe Dufour or a Richard Mille. Both horological approaches are respectable and correct in my view. Just because one is right the other must not be necessarily wrong. Another thing is one's personal taste and choice. 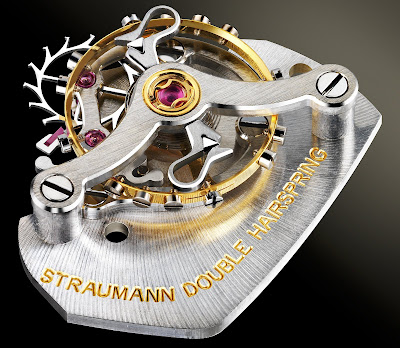 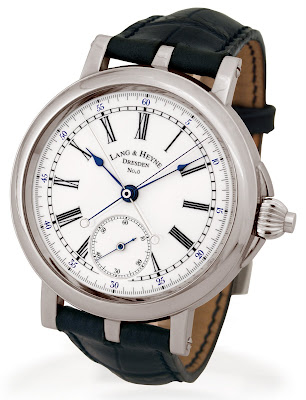 It is more than likely that the current economic situation is somewhat responsible for a resurrection of this philosophy. Don't be mistaken, despite sales being back to figures 10 years ago, watches are still selling. However, buyers are still willing to pay big money for watches but more discreet things are in demand. Gold, diamonds and oversize chunky burgers are shoving the first signs of drops in sales. Even markets that were historically strong in the "bling" are starting to change their consumption habits. To be honest, discretion is not the only reason for this sudden drop in the yellow metal. One of the reasons behind this is that many that have been buying watches these last years have been mostly doing so to be seen with the watch. Completely the opposite of watch lovers, aficionados and collectors. Discretion was always a major concern for these buyers. Plus, if the shit hits the fan like it did... real collector still like watches. Granted, cheaper watches if your personal economy is hurt, but you are still in the market. It's like any other hobby that you are passionate about. 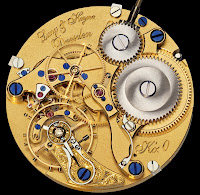 If you have less money you are likely to just do it less and not completely stop. If on the other hand your purpose was to bee seen with a big shiny thing on your wrist that springs attention and admiration mostly with the wrong people, then you will have no problem in drastically cutting back on watch expenditures to zero. 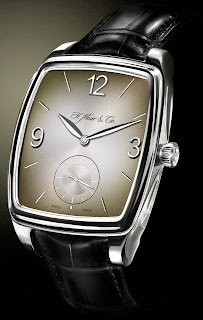 The only and very unfortunate problem with small sale manufacturers is their poor or in some cases complete lack of proper pictures of their products. Selling their product becomes a difficult task if they don't even communicate on their strong point, like the movement finish. Quite a big handicap if your idea is to transmit emotion. As you can see from the pictures posted here, it's just not what it should be. Trust me, these are the handful of acceptable pictures. The others are well bellow even amateur photography standards. I understand that communication departments are expensive but there must be an effort made or else it will be very complicated to adequately reach customers. Pictures already have a hard time transmitting the full impact of most watches.
A word of advise; If you are interested in "old school" you should make the effort to see these pieces in the flesh. Believe me, they are worth a detour. 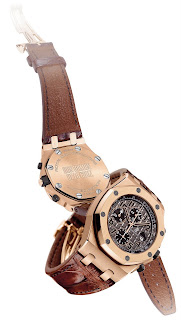 As we are getting closer to the 20th, the official presentation of the "Don Ramon de la Cruz", there are several details that are unknown to most.
Those lucky enough to be "Don Ramon" owners will only need to show up at the airport on the day of the presentation to pickup their watch. This means that everything from thereon is organized by AP. Don Ramon owners will be invited to the limousine service, hotel, lunch, entertainment and dinner. The first wave of Don Ramon watches will all be delivered on the day of the presentation. NOT A SINGLE DON RAMON WILL BE DELIVERED BEFORE THIS DATE. There might be pieces still available because many have chosen special numbers. Many of the requested numbers might be delivered later. Those that chose a special number for their Don Ramon and will be delivered after the 20th are still invited to the presentation and following events. The schedule for the Don Ramon presentation is as follows;
2oth of May Pickup at the Madrid Airport and drop-off at the Villa Magna Hotel (***** GL) 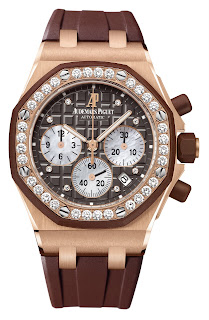 It is impressive that AP would take care of their customers from arrival until departure of their customers. Spouses and partners are also invited even if they have not purchased the "Don Ramon Lady" model. The Bullfight might not be very politically correct yet I recommend that you go and see this if you have not. The Madrid arena of "Las Ventas" is considered the Mecca of bullfighting. This does not mean that the bullfight is going to be memorable, you never know...

There are 100 Offshores Gent and 50 Offshores Lady. Both are numbered and have a price of 36,000 Euros. The Gent and Lady Don Ramon will come with a rubber and hornback strap. Before delivery the owner can decide on the size of strap and if they choose their initials "hot-stamped" on the back of the crocodile hornback strap (pretty cool). The options are; small, medium or large. There are no discounts and they do not ship any watches overseas.

You would think it is a symptom when a watch manufacturer's main novelty at a fair is a mobile phone. If it is, then I am certain that it is not a good one. When Ulysse Nardin presented the "Chairman" I was sort of surprised to see then embark on this route. Actually, the last watch manufacturer y expected to see in this battle. The design was interesting initially although after further inspection it turns out that the product is flawed in many, many ways.

The first flaw is what in a way makes it special. The kinetic rotor. For one I do not think that this would be an adequate power source for a mobile phone. There is no way that a mobile phone gets the activity that your wrist does. Inside your pocket or on a table the rotor is completely redundant. Hence, if you wish to charge it by means of the rotor you will end up embarking on a rather "obscene" workout. Quite stupid for a phone that will most likely be priced in the absurd range. So, the result is that you paid a whole lot of money to look like a fool once your battery is down... I wonder how this would look in a bar when you are trying to pickup a girl and she has a friend. You need to call your buddy to team up for the kill... It's 2 o'clock in the morning... your battery is almost dead... will you go to the bathroom to give it a good, jerk? I guess I have no need to go any further. 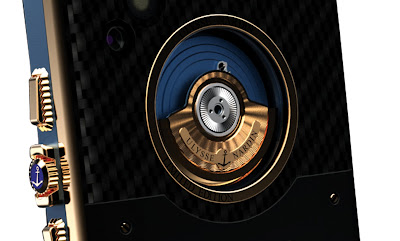 The second flaw is the software. Support will be highly doubtful. Believe me, if they say otherwise they are lying! Software support was less than satisfactory when Vertu first started and they had Nokia behind them. It is a fact that all smartphone software is still crapy and buggy unless you are an iPhone. Lest face it, if you want a smart phone you would go with and iPhone or a Blackberry. If you want a good looking high-end phone you want a Vertu with a straightforward, clean, not-so-buggy Symbian 40 software.

The third and fatal flaw is its size. It just HUMONGOUS! Way larger than an iPhone, any Blackberry, all HTCs and even Sony-Ericsson's P1. Hell, it's practically the size of a PSP!!! In these days you really have to be a whole new level of retarded to come up with something like this and think it will sell. Believe me, in the mobile phone business the LAST thing you want to do is go Panerai!

The design on the other hand is a matter of personal taste. Personally, the more I look at it, the less I like it. 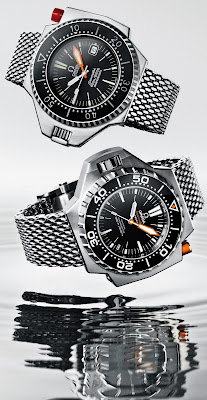 The second surprise from Omega at Base. The Ploprof 1200M. Not a very sexy name but the reborn replica is a very attractive watch indeed. The 70's DNA is unmistakable although I would go with anything except that "Milanese" bracelet that apart from not being very becoming it looks more lake a great way to shave your wrist. Hairy dudes be careful!

Unlike the mythical Ploprof from the begging of the 70's this one has doubled its performance from 600 meters to 1,200 meters. Useful? Not really, but what the hell! Why not? Even if wristwatches are not as important for diving today, because they have been replaced by Suntoo or Aladdin diving computers. The Ploprof 1200M is truly a "real" no bullshit diver. Everything is where it should be. Straight to the point with no time wasted on secondary gimmicks. 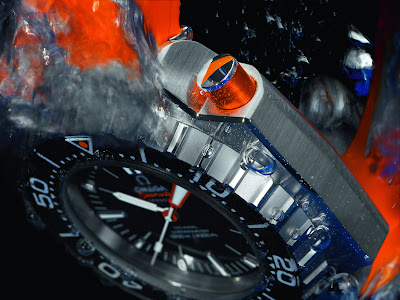 Unfortunately there is a "but". The price. At around 5,000 Euros (about 6,500 dollars) it is a bit steep for a simple diver that does nothing but go deep. For much less you get you hands on SINN's U2 and that will do the same (actually a little more...) for almost a third of the money. Granted, it is not as sexy as this re-issued vintage yet right now the SINN U2 is still the top in the diver range.

First, I would like to apologize for the long silence but I have been very busy. I am going to resume posting stuff here and attempt to catchup with all the stuff from Basel this year. I hope to be back on track with everything in the next two weeks.

I have always been a fan of the Speedmaster. Historical, mythical, straight to the point and within a reasonable price range. You just can't go wrong even if lately the Swatch Group have been working on this not being true anymore. The "Apollo 11" I must admit I was impressed with at the Basel show. 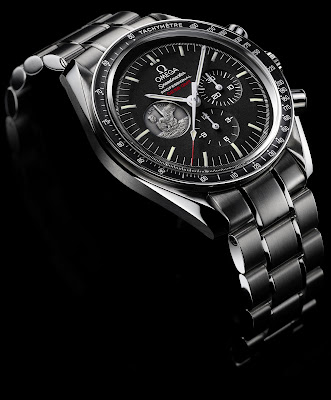 I was not able to see it in the flesh and look at the back (no time!) yet I like the logo of the Apollo 11 better than the other that have been part of the series. Actually the other are rather crappy decals. This one looks good, really good. Good enough for me to actually go to Omega and take a closer look. 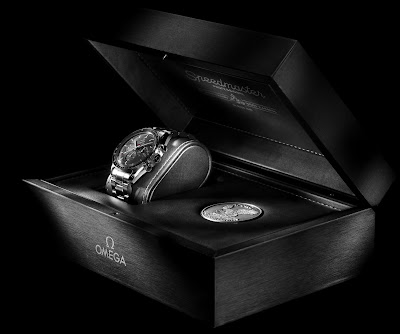