UPDATE: As I suspected at the beginning (and subsequently confirmed by Mr. Sandström this morning) the movement is a caliber by A. Shield (originally AS 1920). It has been heavily improved and modified by Mr. Andersen as you will se in pictures that I will post in the coming days. This movement is the "father" for the High Beat movements as GP, Zenith El Primero and then also the one used in the Daytona. It is quite a watch "connoisseur" movement. 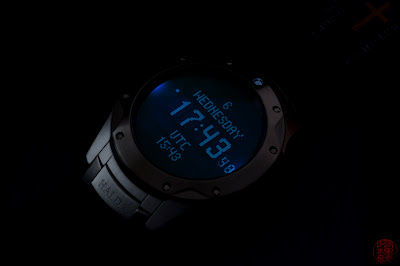 Day 1: Quite impressive feel. I find myself thinking about the production nightmare it must be to make components, in this case the two modules, to fit so perfectly in the watch bracket. The finish of the case and integration of the module "eject" buttons in the bracket is phenomenal. Can't stop pushing the buttons... The space module looks great in the dark. 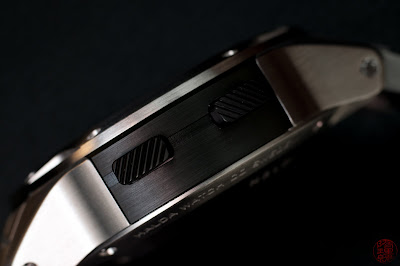 Day 2: Today is the turn of the mechanical module. My first impression is that it is much heavier on the wrist than the space module. Impeccable finish, built like a tank. The dial is elegant and offers very good visibility under any condition. Clean finish and a lot of depth perception with very large indexes. I am hypnotized by the elegant swaying of the seconds hand. I wish it were just a little bit longer in order to appreciate it even more. 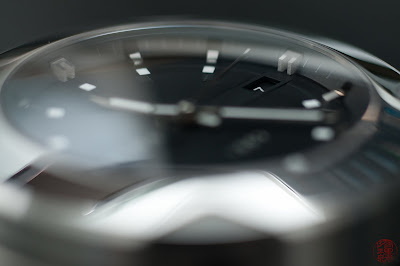 Day 3: I have noticed that the Super LumiNova on the mechanical module shines in a bluish tone and not green. Visibility at night is very good with the LumiNova on hands and indices properly placed. 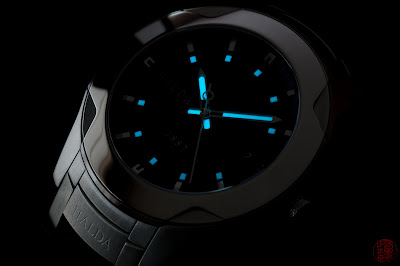 Day 4: I find myself wearing the mechanical module during the day time and the space module more at night. I am surprised since most of my focus initially was on the space module. The mechanical module turns out to be more attractive than I thought plus I have the confront of NOT having to press any buttons to read the time. Even if it is annoying to have to always press the buttons to see the time on the space module I doubt I would have it any other way. Performance wise, here they key is saving as much power as possible. Also, the full blackened screen does look very appealing... 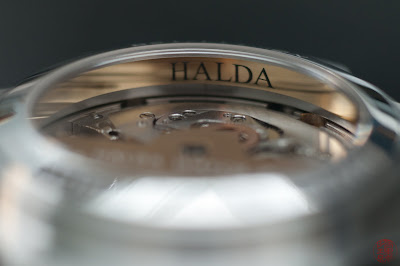 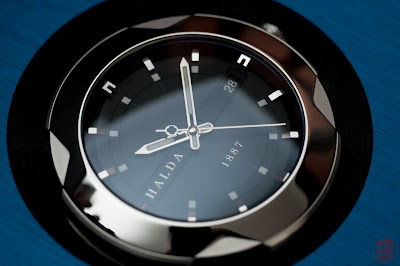 Day 6: I have had some time to play with the space module and the different functions. There is no doubt in my mind that this takes the X-33 concept several steps ahead. You can see from the functions that it was developed in close collaboration with somebody that "really" was going to use this for some really serious stuff. The timer function is my most used so far but my favorite is the countdown. A really cool function to set deadlines... 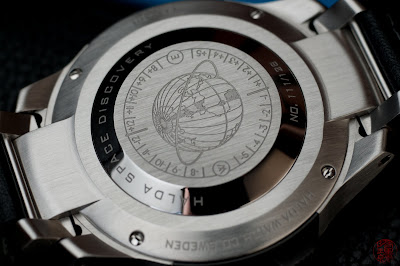 I am very surprised at the mechanical module. Maybe because I did not expect much of it simply because my focus was mainly on the space module. Who would have known...

Day 7: The alarm turns out to be quite loud when off the wrist. On the down side the sound is considerably muffled in contact with the wrist, as with all digital-alarm watches with the exception of the X-33 that has a double back casing. You will most likely not hear it on a busy street but probably under normal conditions. Omega's system allows for a VERY loud chime while having the watch on the wrist but has the disadvantage of accumulating dirt in the lateral openings as well as a quite bad water tightness rating for a sports activity watch. 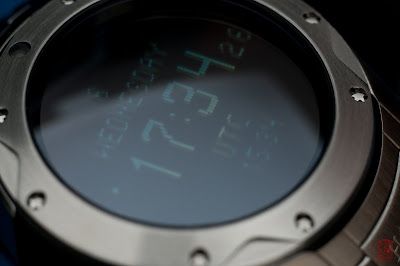 Day 8: I don't think I have worn a digital watch for such long time since my first in the 80's... Hell, it is going to be hard moving to the next watch in a few days. Unbelievable. 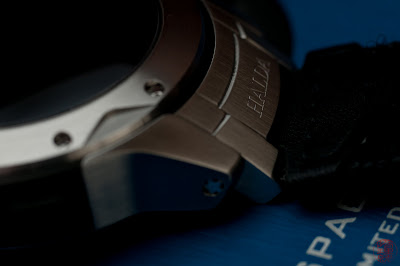 IMPORTANT: If you are planning on wearing the watch primarily or initially on the Kevlar strap I firmly suggest that you have it fitted with the Velcro strap straight from the factory. It is not easy to put on the watch since you have little space between the leather and the watch case. The operation is not terribly difficult but requires some skill, especially if you do not want to scratch the inside or back of the watch case.

Day 9: Back to the mechanical module... Still intrigued about the upgrades and modifications made by Mr. Andersen. That deserves a future post with detailed explanations. Until then, some pictures... 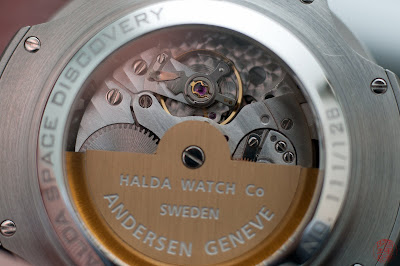 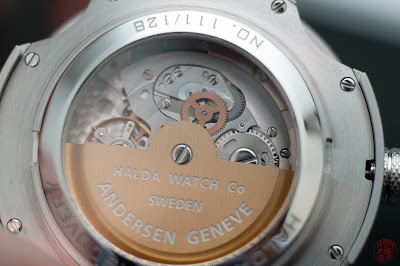 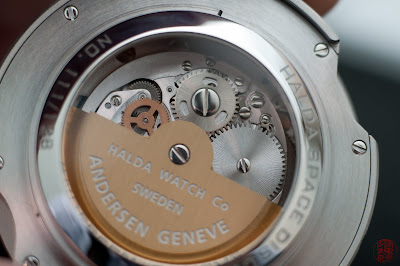 Day 10: My Last day... nothing to report. Except that tomorrow I am ordering a couple more of these Kevlar/Velcro straps. They are fantastic and as with many things I would hate not to have a supply should these run out. 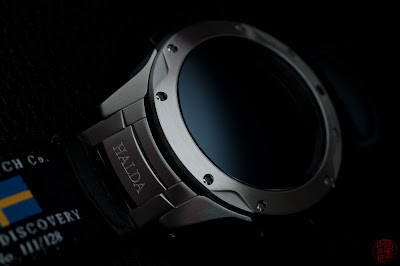 The test has come to an end and my impression has been quite positive. There is some room for improvement in future models yet the "Space Discovery" is very, very impressive. Build quality is outstanding and unusual considering the price. The concept is innovative and fun (little of that in the watch world today under 10k...). The mechanical module reached much beyond my expectations and the space module gives a feeling of "high-end" unknown in a digital watch to date.
On the downside the visibility of the space module needs some tweaking (in broad daylight there are too many reflections) and the mechanical module is a bit heavy when on the Kevlar/Velcro strap. Personally I think that the steel bracelet is redundant and is penalized by an "average" deployment clasp. The bracelet needs to feel "tighter" and would benefit immensely from a micro-adjustable clasp.

The price is the real stunner here, especially after the latest hikes during the last 12 months. At 8,800€ it is much more than just competitive. When you look at the final result and take the price in consideration you can't but help feeling that you are getting a free ride somewhere in here. I guess that cutting two "middle" men has its advantages, not only cutting the final price but also controlling discounts. However, growth with this commercial strategy is immediate at first but limited at best in the long run. For now I can only congratulate HALDA for this first "journey" and can only hope that there will be many more to come. 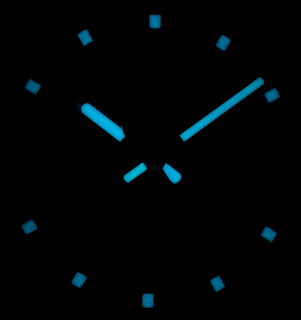 White/Blue Super LumiNova
I have already reviewed the HALDA "Space Discovery" in a previous post. You can take a look at it further down.
HALDA...
Posted by KronosClub ... Thursday, April 07, 2011

Where can I get one?

Straight from HALDA Sweden. If there are any left they are only available directly from the source.

Thanks so much for this!

I have reserved one myself and will collect it during May in Stockholm. I literally cannot wait. Once again, thanks so much for this outstanding test.

I suspect that this first Halda will be quite a special piece in years to come.

Hope this "new" format is of help to those who do not have the chance to see these watches in the flesh. I am still tweaking the format and I think that for the next video I will not record my voice and simply add subtitles. (I can't stand hearing myself!)

The black gloves might also come off since many told me it reminds them of instruction videos for terrorist on; "... how to build a nuke in 3 easy steps..." It also make the movie look too official. I will test both ways for the next 10-day test.

Hi D. No I disagree. Of course everyone hates their own voice. It's good to hear you - you have a nice delivery. And you throw in many little comments that you would never bother to do with subtitles. The black gloves are awesome- very 'cat burglar'. One thinks of David Niven as the Pink Panther thief.